Our installer excludes / deactives some files, which may be in conflict between our scenery and ORBX - that's why you may see such folder, but if you do not have any of ORBX, it will not affect your sim.

Thanks for help on jetway use on TDS freeware 787. Should have stated that gate K19 or K15, used for heavies. Did some more research and just need to change exit coordinates.
Top

Hi together,
Note: Orbx has changed its system for incorporating its sceneries. From now on, this is done via XML files. The location of the sceneries can be chosen freely.

Thanks for this info.

Hi there,
I'm new to your forum.
I purchased and downloaded Chicago City + Chicago Airports from JustFlight the other day. Although the download was tediously slow, everything appeared to complete swimmingly. However, when I open FSX I'm not seeing either download in FSX Scenery Files; I assumed it would be at the top of the list with a tick against it? But it is not. Any suggestions please? I'm using FSX Steam / Windows 10 on a new PC. Thanks.
Steve
Top

Hello Steve.
There are two options during install - FSX Steam and just FSX. Depending on how your FSX Steam is installed you might try both of them.

I used FSX STEAM during the download, since that is my platform. I shall check later on my PC and see if I can locate them and get them to appear in FSX Scenery Files.
Top

The installer is the same for all platforms. During the installation process you have different Sims to choose - it's possible that you choosed FSX Steam (Dual Mode only) - if it's FSX Steam but not in Dual Mode, please choose standard Flight Simulator X as your sim.

Yes I remember that; will I be able to download again and try FSX instead of FSX Steam duel mode?
Top

you don't need to download anything - just run the installer again and mark FSX as your sim.

What does it mean that you cannot find Chicago Airports X installer?

As far as I understand - you bought this scenery from JustFlight and you downloaded the file from the store, right?

Then you should start the exe file with admin rights and install the scenery in your sim (installer will ask you which sim do you have and you should choose Microsoft Flight Simulator X there). 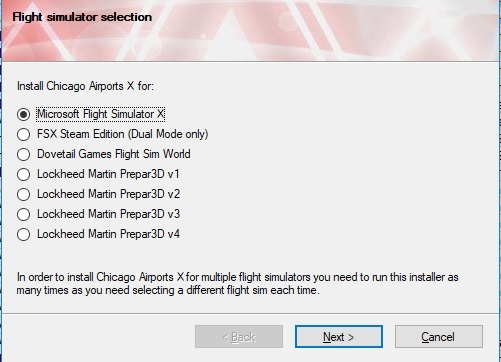 If it's not your problem, please express it once again.

Yes, I downloaded Chicago Scenery followed by Chicago airports; one was 3GB and took about an hour to download, and the other was 1.1GB and took about 1.5 hours to download.
Everything appears to have downloaded fine. However, in FSX Steam (when opened), Scenery Files KORD does not appear at the top of the list with a tick against, as it should.
I then tried to search for the files: This PC, C Drive, program files x86, steam, steam apps, common, FSX, Sim-objects, and I cannot find the installer; under either Add-on Scenery OR Scenery there is a file KORD (I think, as I'm not at at the PC at this moment) and it contains just three files, which I can't remember what they are named, but that picture you showed just now was not amongst them. Therefore, I don't know where to find the installer to reload them under FSX rather than FSX Steam. Incidentally I am new to Windows 10, having until now just used MacBook Air; the Windows PC is only two months old. I'm not 100% sure when using Windows 10!
Top

It's not enough to download the files - after downloading them you need to activate downloaded exe files to start the installation process. You should find these downloaded exe files somewhere on your C drive ( search function), one by one mark and click by right mouse button and choose "Run as administrator". Afterwards you should continue in accordance to the installer's instructions.