why when arriving from another airport the lights at the terminals are off and instead if I open the flight directly from the airport they are on?

Hi, I presume you are talking about the dynamic lights. This is strange because we've never faced this problem in case of EPWA. Which scenery version have you installed?

First of all, I would like to thank you for releasing top quality airport add-ons for Poland! I own EPWA both for X-Plane and Prepar3d as well as the Polish Airports series.

I recently got back to flight simming due to more time available - and started right away from Prepar3d v5.1, so my below suggestion was tested and only pertains that exact version.

For some time now, I was puzzled on what is the reason that dynamic night lighting provided in the Drzewiecki's Airports don't seem to work at all. With option on, the stands and places where there are normally lights are completely dark.

As I have some modding experience from the other games, I have decided to dig into the files to see what might be the culprit, here are my findings (hopefully, these will be of some use for Mr Stanisław):

1. It seems that in recent game versions, effects containing specific sections in their .fx files, cannot be attached to models themselves, the sim won't show the scenery error, but they will be ignored. I mean these (just an example): 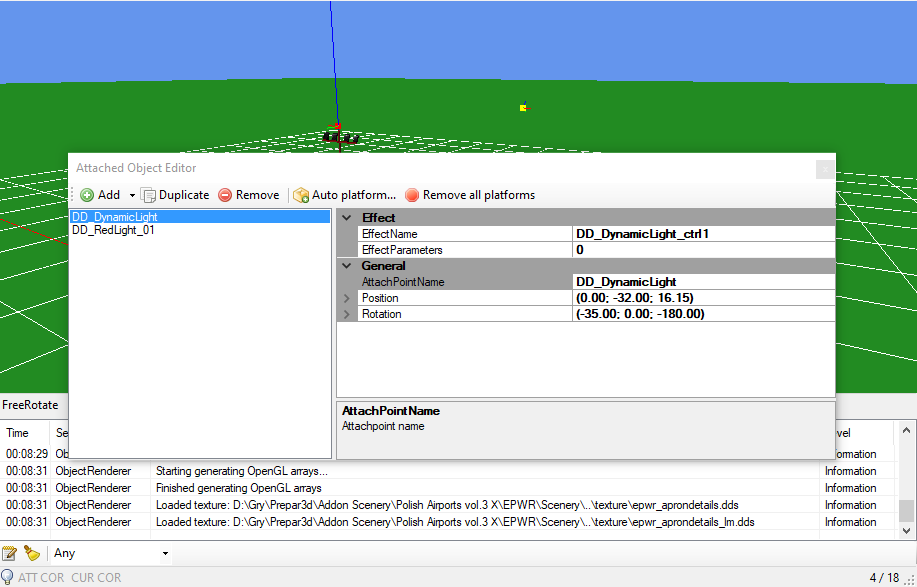 2. Instead, how I made them to work is to reference their positions globally over the airport, to achieve this purpose, I used Airport Design Editor, added my effects vs Google Satelite Maps and Drzewiecki's airport layout reference - to get exact masts locations, like here: 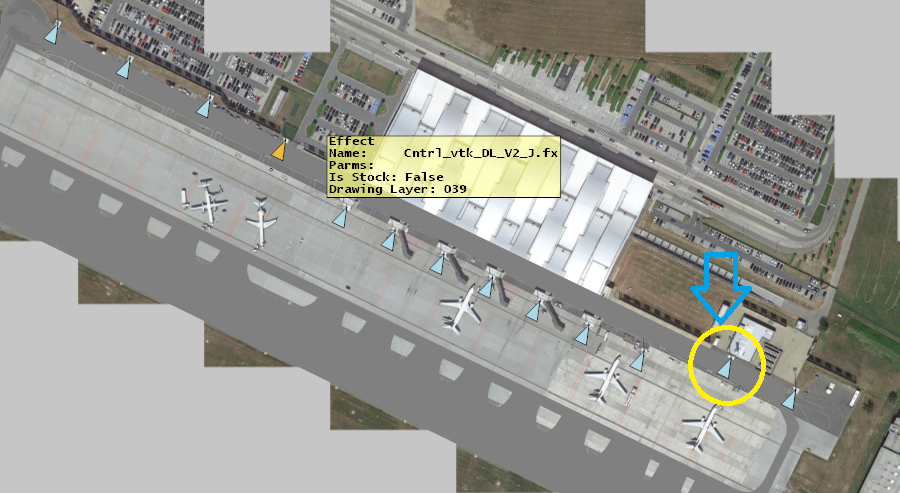 and around old terminal:

What is nice about this solution - in order to post the modification, you don't need to include any copyrighted files, simply reference them there. For this exact purpose I used the Freeware Dynamic Lighting Library, their effects seem to be very light on the FPS and ADE has generated seperate .bgl only containing this "fix".

Another benefit is that your effect added this way, can have exact same properties as the ones you used when attaching them to the model itself. (height, range so on).

Here is the result:

(First I tested at EPWR as it is less complex) 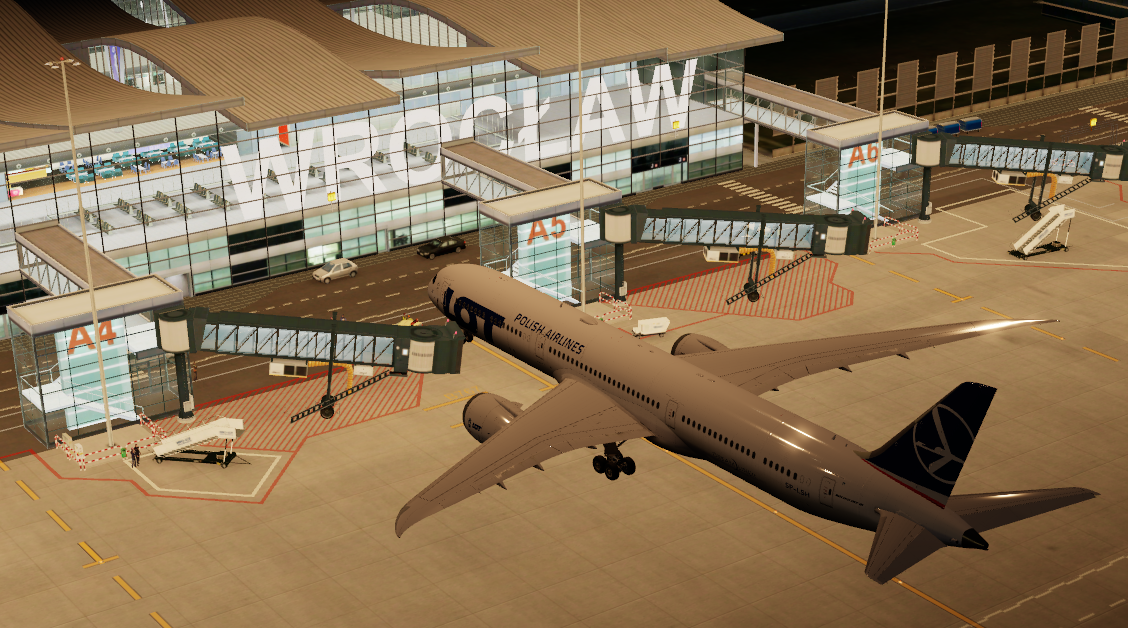 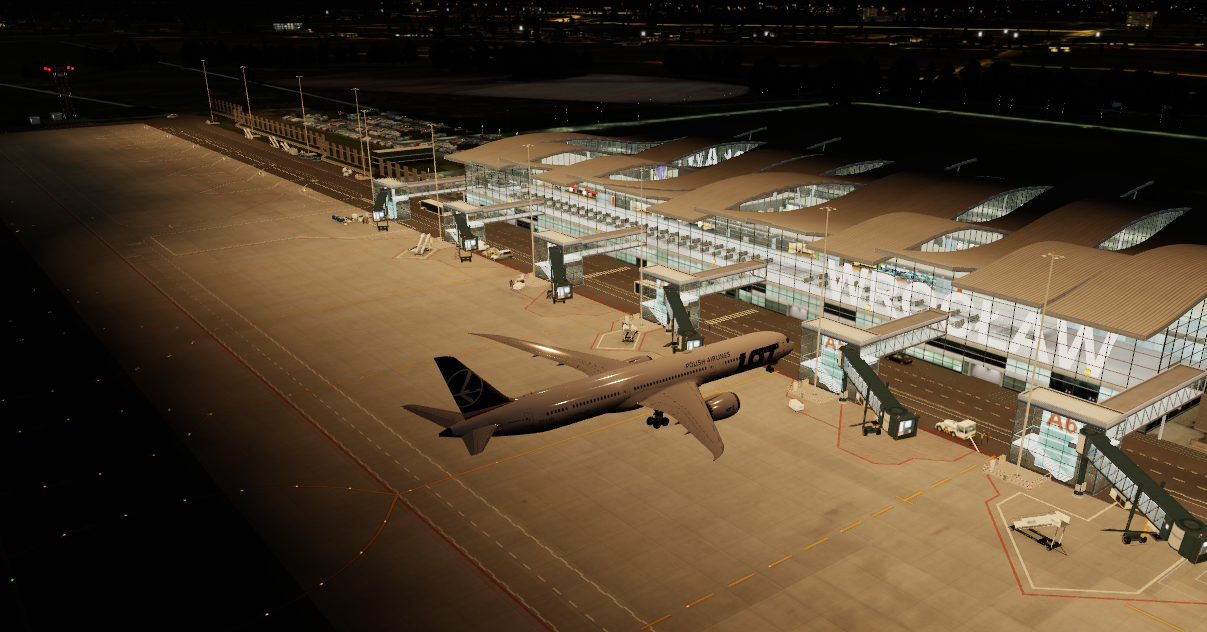 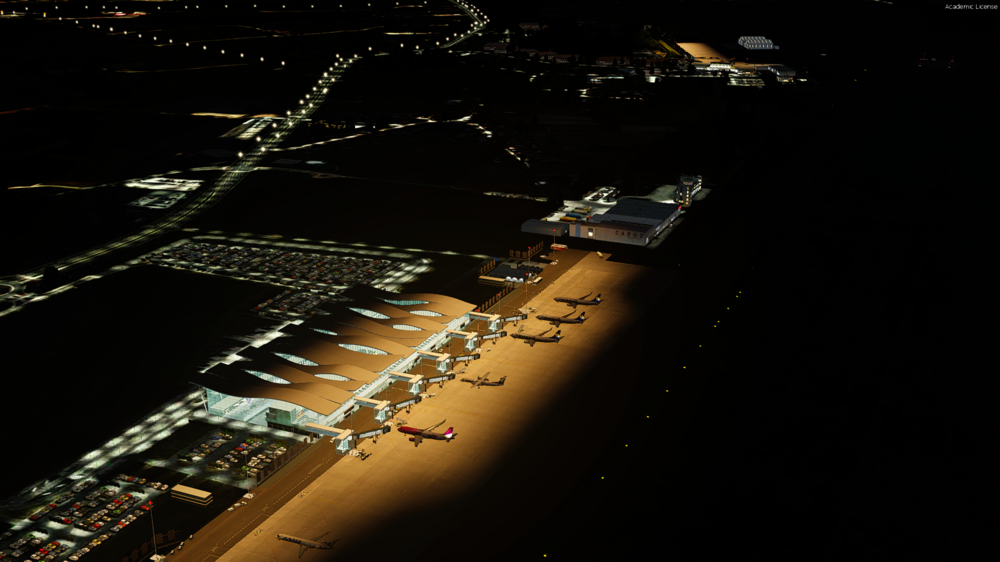 Hi, first of all we have nothing against hearing different suggestions or opinions here.

However we should firstly understand what is causing a problem in your case, because Dynamic Lights should work without any problem and you shouldn't be forced to modify any files. We are talking about P3D v5.1 - what about scenery versions that you are using? Can you post few screenshots here to show us how does it exactly look in your sim? These dynamic lights do not work after arrival only or they do not work at all? Have you tried to use the files from the previous post to see if it solves your problem? (viewtopic.php?p=23046#p23046)

At the moment the crucial thing is to understand what is causing this problem in your case, because in our test environment DL work fine.
Top

Thank you for your answer, sorry for the late reply - I have missed the notification that there was an answer in the topic.

To make sure nothing else is influencing my results, I prepared a new testing bed for this issue. I tested it against clean install of Prepar3d v5.10, PMDG 777/747 series as well as QualityWings 787 added.

What I realised, that the DD's dynamic lighting indeed works, (I took the displayed ground effect as simply baked into the texture, which is not the case) the issue is not with it not being displayed as I initially thought, but rather with non-vanilla planes not receiving the effect - or receiving it too softly/lightly. Please refer to the screenshots below: 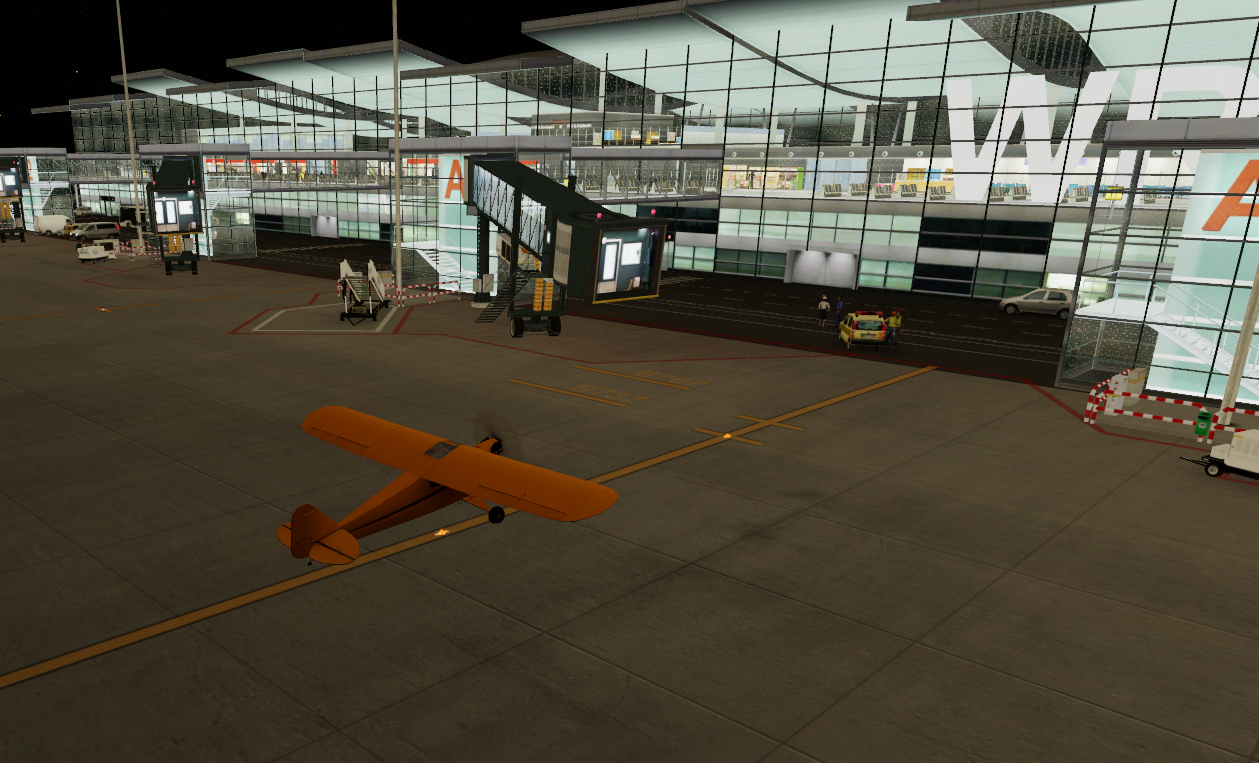 This is the effect of PMDG 777-200 with "House" Livery included with the plane - not receiving the effect (same goes with QualityWings 787. PMDGF 747 and so on: 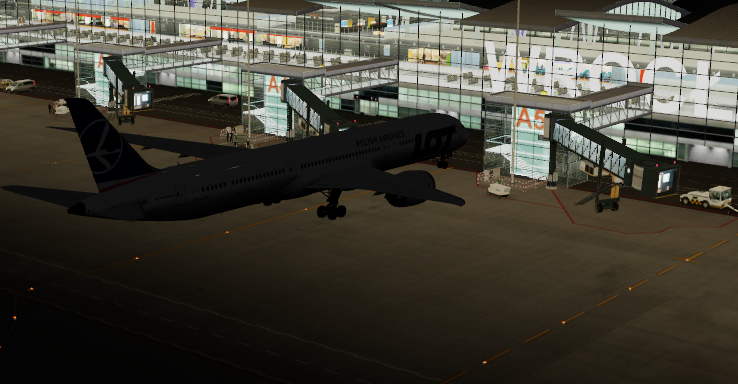 Now the question was - what is different between the Dynamic Lighting Effect applied by DD and the one from the Freeware Library that makes it applied to the custom planes.

I used stand 11 at EPWR to make sure I am at the place where the referenced effect is being projected.

The only thing standing out and different were the properties of [ParticleAttributes.0] in the DD_DynamicLight_01.fx effect.

I have added Falloff Exponent=0.20

and the result was: 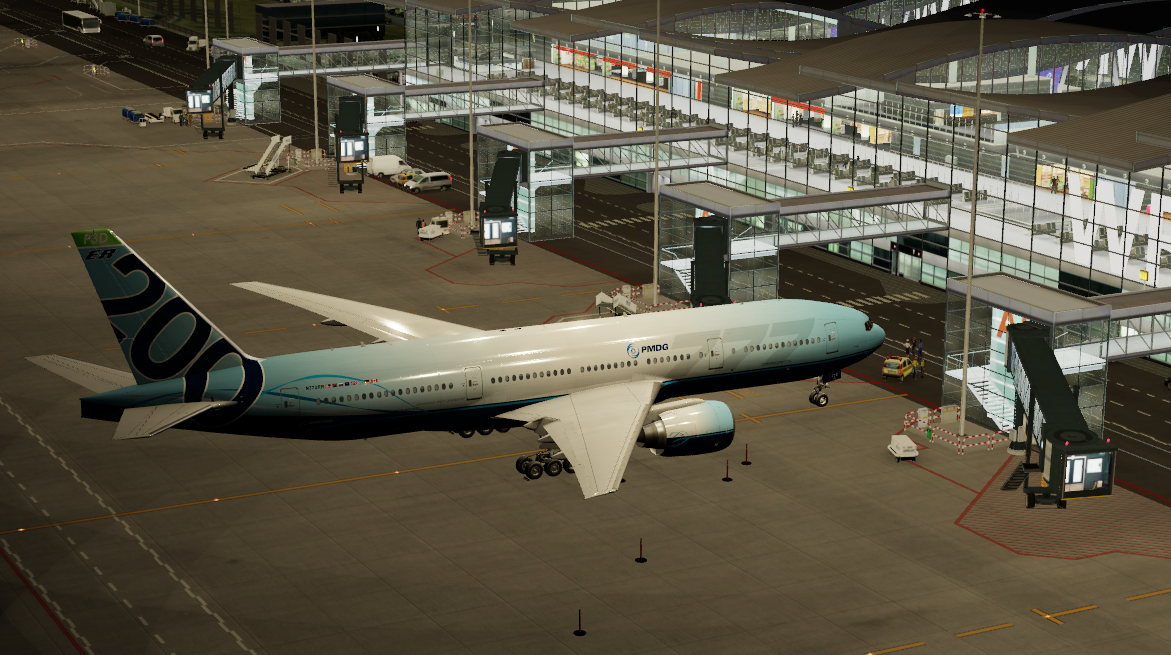 probably a bit exagerated, but good to illustrate the issue change.

To reproduce this issue on your end, these steps should be followed:

I am by no means en expert on how the effects work in the sim, and only have rudimentary knowledge, but hopefully these observations can be helpful in any way.
I also took the time to check and edit other effects at EPWA and the result was similar and to my liking, so there is no need to use anything external to get it fixed - at least in my own case.
Top

Thank you for sharing your experience - we will take it into consideration for the next updates. If you want to share your fix here for the specific sceneries, you are welcome.
Top
Post Reply
912 posts