https://www.drzewiecki-design.net/c.htm (but if there are many, please provide the link to the image hosting site)
Top

Love it!! I'm taking flight lessons at this airport and it is amazing seeing the flight school modeled so well!

Only odd thing is the runway appears as two different colors for me. Is this a limitation of MSFS that forces the darker color? The real runway looks much closer to the lighter sections.
You do not have the required permissions to view the files attached to this post.
Top

Thanks for your kind words - it's really nice to get such a feedback. I'm afraid this can be some kind of limitation - loading of color textures is doing so.
Top

If you mean the beginning of rwy 34 then it is lighter indeed (it is concrete while the rest is asphalt). 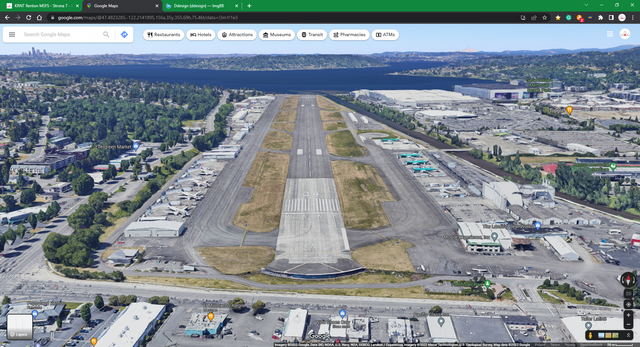 Hello. Thank you for Renton. I'm having an issue loading the scenery. It will load, eventually. But it takes a long long time. About 8 minutes if I time it. I have installed it to my community folder using the Addon Linker method. I'm wondering if that is the reason. I've got a 12700K with 2TB M.2 ssd - it's a powerful PC.

I can load 100 miles from the scenery and its regular timing but if I load right at KRNT it takes that long time.

We haven't noticed any significant increase in the loading time. Such long loading time sounds strange indeed, so maybe this is this Addon Linker method, but I doubt we've ever tested it.
Top

I have just purchased and installed KRNT into MSFS today Build 1.27.21.0 via the marketplace.
Where is the load in the sim located because my install did not show up, despite MSFS saying it is installed when I selected KRNT in the world map.
I sort of expected to see it in the Community folder, but it Seems to be in.. E:\MSFLIGHT SIM 2020\OFFICIAL\ONESTORE\DRZEWIECKIDESIGN-KRNT\SCENERY\KRNT RENTON MSFS\TEXTURE

Maybe I am missing some step in the settings/install process.
Top

OK, some how, with some fiddling about in data settings/cache etc, I have managed to get KRNT working..some how!!
Amazing graphics and the whole place looks alive.

Is there an installer for MSFS marketplace?
Is there any recommended settings for graphics etc
Is there a user manual for KRNT?
Be great if there was a map of the place identifying buildings with some thing happening.
How do the doors open/close, say on the paint shop or hangers.
How do we get an aircraft moved into/out of the paintshop?
Is there a schedule or? that causes actions like moving the aircraft fuselage down to the wing area.
Top

Installer for MSFS is managed by Marketplace, not by us - we only provide the source files.

We don't recommend any settings - each user has his own needs, configs and PC specs.

As it's not our installer, we have very limited influence what is available and where.
Top

Hi Guys, I purchased Renton today for MSFS (through Marketplace for my Xbox Series X). Every time I to load at the airport, I get CTD. It may be that it needs an update after Sim Update 10 (?). Are you aware of any issues with Renton on the Xbox, and if so will there be an update soon?

I did manage to fly to Renton & land there, but I can’t load in at a the airport as it just CTD’s every time.

It looks great by the way….

We need to take a look after the last sim update. Xbox versions are tricky to make any test, because the scenery is compiled by Asobo only and thus we are not able to perform any tests before the release. Then it's very troublesome to solve any issues because we are not able to make the respective test on our own to check if our fixes work.
Top

Along with not being able to load into Renton (CTD every time), I was also having some buggy issues with the sim in general (my TV screen would go black for a second or two and then come back as normal, weird stuff like that). I had been on Sim Update 10 Beta since the day it was released & had practically zero issues the whole time (4 CTD’s in total, but they were all over about 4 days, on the 2nd to last update that MS rolled back as it was unstable).
Yesterday I decided to delete the whole game & reinstall everything again, to see if it had any impact on my buggy issues & on Renton. The reinstall has fixed everything, buggy issues gone & I can now load into Renton. The weird thing is, before I deleted everything, my Reserved Space (Xbox equivalent of the PC Community Folder) said I had 373.8GB’s, but after re-installing everything it now says I have 333.6GB’s (and that’s after I added Renton + another liveries DLC. I have checked everything and I’m not missing anything, everything is installed exactly as it was before (plus Rento & Liveries), but I’m showing over 40GB’s less in my Reserved Space.
I’m guessing here, but the Beta was just over 40GB’s (core sim & updates) and I’m beginning to think that maybe all the old files were still on my SSD and impacting on the sim (?). I’ll put a post up in the MSFS Forums & see if anyone else has come across the same thing, or has more technical knowledge than I do & can explain what happened.

One last thing, now that I can load into Renton, I’ve noticed that the static planes that are parked around seem to have spawned twice (one over the other). One plane will have a livery (Ryanair/Buzz/Navy etc) & one will be the green colour like the newly built planes. You can clearly see two planes, they’re at slightly different angles, parked on the same spot.

I hope some of is helps you guys (Renton is amazing, even with the Frankenstein planes

), I can’t wait to get some decent study level planes to fly from here, hopefully the WASM is sorted for SU11 and I can PDMG finally flying on the Xbox

Hi.
Perhaps you have another add-on with static airplanes, like the one from LatinVFR?

Thanks you, that was my problem (LVFR).
I had tried uninstalling the LVFR yesterday, but maybe I forgot to clear the cache!?!

) and it’s fixed the “Frankenstein” planes, thank you so much!
Top

Still having the problem that it crashes when loading in there on Xbox, already reinstalled the entire sim but still same issue running on SU11 even with just this addon installed it crashes no idea why it happens, just wanted to report the problem
Top
Post Reply
108 posts